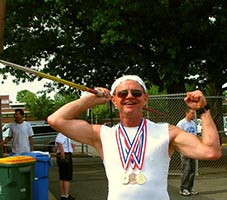 "I just wanted to drop you a line and let you know how things are going. This past Saturday I had my first competition since the surgery. It was the CT state games in Hartford. I’m not quite back to my pre-surgery strength yet, but I didn’t do too bad for an old guy who has been sewn up a number of times. The track clubs from NYC and Boston were both there which made the competition a little tougher, but I did take the gold in long jump and triple jump. Even sweeter, I took the bronze in the Javelin (which qualifies me to go to the national finals in 2011). I’ll keep working at it. I believe I can get a gold in the javelin by the end of the summer. The next photo that I send will have a gold for the javelin. I don’t quit easily. Thanks for all the help and for believing I could do it again."