Resection Arthroplasty of the Shoulder

What is resection arthroplasty?

Resection arthroplasty is a procedure in which the humeral head or the prosthetic components (implants) are removed as a consequence of failed surgery, often in the setting of an infection. This is only performed when no other reconstructive options are possible. 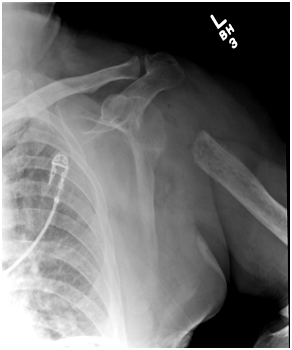 When/ Why is a resection arthroplasty needed?

This procedure is a final salvage procedure, after multiple failed operations, when the patient has intolerable pain and poor function.  It is often associated with infection after prior surgery and then failed reconstruction procedures.  (see below)

Function of shoulder after resection arthroplasty: what patients should expect

This patient had a total shoulder arthoplasty (Fig A) which became infected, so she had the components removed and a Prosthesis of Antibiotic Loaded Acrylic Cement placed (PROSTALAC – see module http://www.bosshin.com/prostalac).  (Fig B).  She also had IV antibiotics given for weeks but her infection could not be completely eliminated.  Due to this, along with her severe pain, she had a resection arthroplasty performed (Fig C). See video of patient 1. 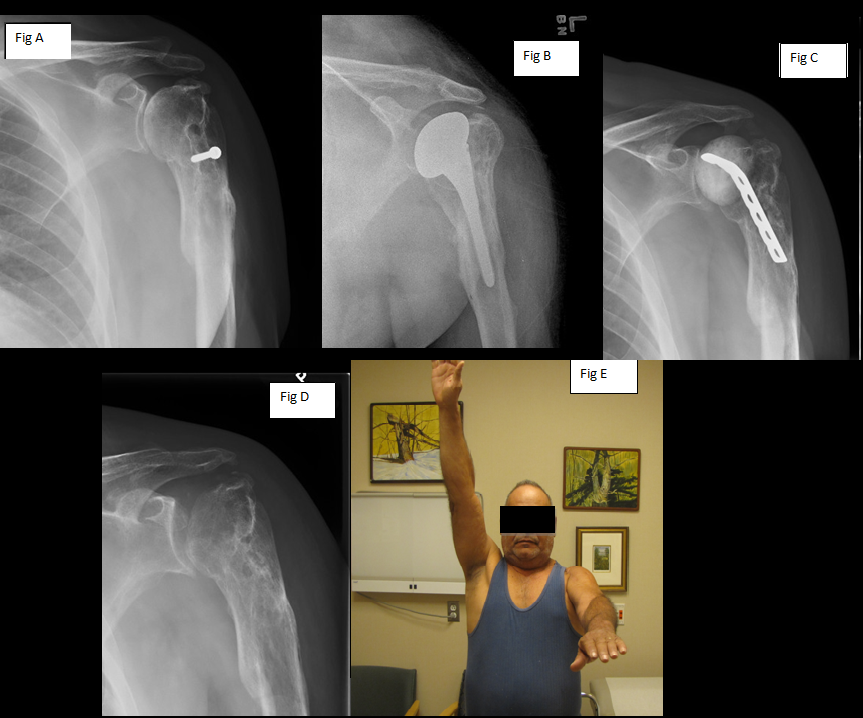 This patient had a fracture that had healed in an incorrect position and had a metal screw still in the humerus as well as arthritis in the shoulder (Fig A). He went on to have a hemiarthroplasty (replacement of just the humerus) for his pain and arthritis (Fig B).  He developed an infection which was treated by removal of the component and placement of a PROSTALAC antibiotic cement spacer.(Fig C).  Due to continued pain and inability to completely cure the infection, he had a resection arthroplasty performed (Fig D).  This patient’s xrays demonstrate the variability in the amount of bone that is resected compared to the previous patient.

Six months after surgery, he is in 0/10 pain, reports that he feels his shoulder is 70% of normal and is happy with the results of the procedure. He is seen being able to lift his arm close to 90 degrees (Fig E). See video of patient 2.

How is resection arthroplasty completed?

Once it is determined that a resection arthroplasty is the best procedure to address pain, infection or fracture otherwise untreatable by other methods, the procedure is removal of the humeral head and / or glenoid component.  After removal then no additional reconstructive efforts are made.  The space between is left to have scar fill in. After humeral head resection, tissue forms between the remaining humeral head and glenoid.  The formation of this scar tissue, is important for achieving a good functional result.  The amount of the humeral head that is resected depends upon the patient’s operative history and how much was resected during past arthroplasty operations.

The authors reported that these patients had significant improvement with their pain going from a 6 (+/– 4) out of 10 to a 3 (+/– 2) out of 10.  The average forward flexion was  45 degrees (+/- 30 degrees and external rotation to 9 degrees (+/- 13).  The conclusions of this study indicated that resection arthroplasty is good at relieving pain, however patients can expect poor postoperative function.  This study also showed that patients having a resection after a reverse TSA had the worst outcome.  .

In conclusion, resection arthroplasty can be viewed as a last option after other procedures have failed and no other options are available for a patient to manage their pain. While this operation has been successful at decreasing pain levels, it may not completely eliminate pain.  Following this operation, the patient never has a normal shoulder and has greatly decreased range of motion; however, many patients will perceive a dramatic reduction in their pain compared to their preoperative situation.