What is a shoulder fusion (arthrodesis)?

A shoulder fusion is a procedure in which the humeral head is fused to the glenoid (socket of the shoulder) and the acromion in order to eliminate painful motion through these joints and stabilize the shoulder.  It is usually a last resort for complex shoulder problems that are not amenable to simple bony or soft tissue procedures alone due to severe soft tissue loss or nerve problems. 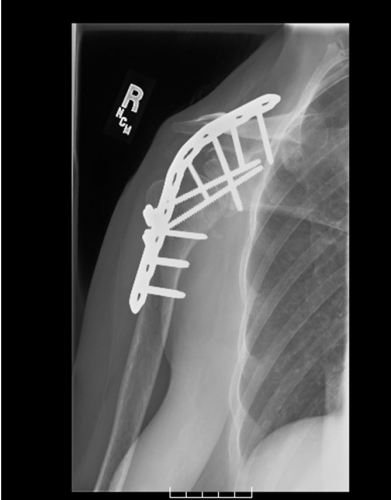 Why/when is a shoulder arthrodesis necessary?

A shoulder arthrodesis is usually performed as a salvage procedure after multiple failed operations for some of the following conditions:

How is the operation performed?

A shoulder arthrodesis consists of creating a bony union between the two joint surfaces of the glenohumeral joint: the humeral head and the glenoid (socket of the shoulder) as well as between the humeral head and the acromion.  This is achieved by removing any remaining cartilage and soft tissue and then using a plate and screws to position the arm so that compression will be achieved across the two joints to promote fusion. The arm is placed in a position to try and optimize for post-operative function. The main goal is for the patient to be able to reach his(her) mouth and perhaps to the top of the head. As rotation of the shoulder is eliminated it may be difficult to ensure that they can also reach the arm behind the back in order to do hygeine, so it should be anticipated that the other arm should be used for this activity. A bone graft may also be used, and if so it is typically taken from the same side iliac crest (bone above the hip).  In some cases cadaver bone may be used instead of the patient’s bone.

X-ray guidance is usually required in the operating room to ensure the screws are placed appropriately.

What kind of function should you expect postoperatively?

In general this operation is a trade-off, in which patients experience a loss of motion but are afforded pain relief. Most patients can bring their hand to their side pocket and to their mouth (Reference an example of a patient here. I think we have a picture of video). Some may be able to place the hand on top of their head.

Between April of 1999 and April of 2016, Dr. Warner performed 24 glenohumeral fusion surgeries at MGH. The graph below describes the reasons that these 24 surgeries were performed. Here is the breakdown of the indications for surgery, grouped by type, as well as additional details where applicable. 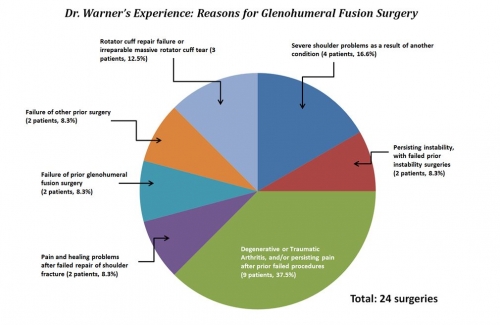 Below is a graph showing the average amount of pain that patients who underwent this procedure experienced, before and after surgery. 10 is the “worst pain imaginable,” while 0 is “no pain.” Note that of 24 patients, this data was only available for 14 patients pre-op, and 13 patients post-op. The post-op pain level was recorded at between 1-3 years after the surgery (depending on the patient). Despite these limitations, the average pain relief after surgery is evident. 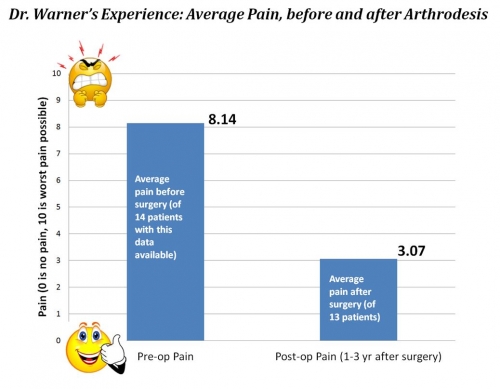 Below is a graph showing the Subjective Shoulder Value, or SSV, before and after surgery. For reporting SSV, the patient is asked: “what is the overall percent value of your shoulder if a completely normal shoulder represents 100%?” Again note that the number of patients where this data is available (11 patients pre-op, 9 patients post-op) is limited. Between 1-3 years after surgery (depending on patient and follow-up) the average SSV increased to an average of around 60%, a dramatic improvement from 16% before surgery. 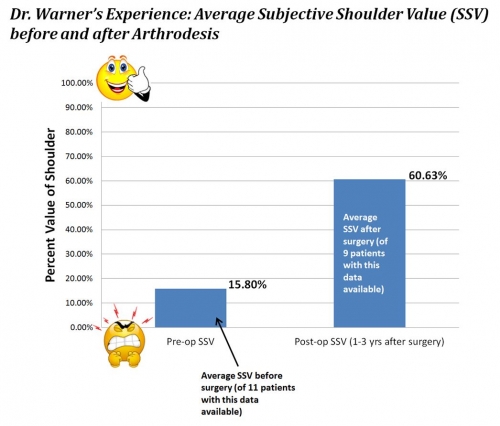 This is one of the landmark studies of glenohumeral fusion.  In their evaluation of 74 patients who underwent a shoulder arthrodesis between 1950 and 1974, 68 of 74 patients had a successful fusion with only one operation. They were fully fused at an average of 16 weeks postoperatively.  Three patients did require an additional surgery.  Seventy-one percent of the patients could dress easily, 70% could tend to personal hygiene, 71% could sleep comfortably on their operative arm, 71% could use their arm for eating, 44% could comb their hair, and 68% could lift moderate weight objects.  There were some complications, with 17 patients requiring removal of hardware and 10 patients had fractures at or around their hardware. Two patients required another surgery to remove some of their distal clavicle at their acromio-clavicular joint from pain secondary to arthritis of that joint. One patient had an infection that required operative treatment. Overall, 82% of patients were satisfied.

This group evaluated 57 shoulder fusions done with a single plate technique between 1980 and 1991. The average age of the patient was 31 years old (range 14 years to 60 years).  Thirty-three of the patients were available for review.  Twenty-seven of the 33 patients studied felt confident with the use of their arm. Of the groups studied, 71-90% of patients felt improvement with their arm from before surgery.  Twenty-nine of thirty-three patients could work at waist level and get dressed easily. Twenty-five patients could wash their face and 20 could reach their opposite axilla. Twenty-one could use the operative arm at shoulder level and 17 could eat with that hand.  There were 8 complications (14%). Patients fused for instability of their shoulder were the least satisfied.

They studied 18 patients who underwent a shoulder arthrodesis for osteoarthritis (5 patients), recurrent instability from deltoid dysfunction (3 patients), fracture sequela (13 patients), failed arthroplasty (1 patient), shoulder tuberculosis (1 patient), and a gunshot wound (1 patient) from 1982-2003.  They followed patients for an average of 7.5 years. Sixteen of the 18 patients had a successful fusion.  Both patients who only partially fused had no pain. Six patients had pain from their hardware and had it removed after they successfully fused, two patients sustained fractures around their hardware but both healed, and one patient had to have a revision of their fusion. Nine patients had some pain postoperatively with an average of 2 on a 10 point pain scale. Patients had average shoulder abduction of 59 degrees, could raise their arm in front of them an average of 77 degrees, and externally rotate 5 degrees. All of the patients could reach their mouth, 8 could reach their perineum, and 7 could comb their hair. Overall 15 of 18 patients were satisfied.

They recently studied 6 patients with anterior glenohumeral instability from epilepsy. These patients had an average of 4 previous surgeries before their fusion.  All of their patients had a successful fusion at an average of 2.8 months after surgery.  They had no subjective instability feelings. All average outcome scores improved postoperatively. Five of 6 patients avoided fewer activities than they did before surgery, 3 of 6 felt their shoulder interfered less with their daily life. One patient had a revision of their fusion due to pain and went on to bony union and improvement in their shoulder function and pain after the second surgery. One patient was in a motor vehicle crash and sustained a fracture that required surgical fixation. None of their patients required hardware removal.

This was a retrospective review of 8 patients who underwent a shoulder arthrodesis between 1991-1997. These patients had an average of 7 failed prior stabilization procedures. The mean age of these patients was 26 years old (range 18-36 years old).  There were no complaints of subjective instability and all patients were satisfied with their fusion. Six patients could dress easily and 7 of 8 patients could carry a 10 pound bag without difficulty. Five of eight patients did require hardware removal and two patients developed acromio-clavicular joint pain and arthritis that required surgical treatment.

This was a retrospective review of 43 patients who underwent a glenohumeral fusion between 1964 and 2001.  Thirty-two of the patients had the fusion for paralysis of upper extremity musculature, fifteen for osteoarthritis, seven for infection, and six for instability. Eight-eight percent of patients went on to a successful fusion at an average of 14 weeks postoperatively. The patient’s average motion was 56 degrees of abduction and 60 degrees of forward elevation.  The patient’s outcome scores improved postoperatively.  Ninety-one percent of patients considered their outcome either excellent, good, or satisfactory. Five patients did not fully heal their fusion, 5 patients had a postoperative infection, and 4 patients had a fracture around their hardware.