What is AVN and who gets it?

AVN stands for avascular necrosis which is also sometimes referred to as osteonecrosis (osteo= bone; necrosis= dying tissue), which means the bone dies as a result of loss of its blood supply. This can happen due to trauma which results in a fracture or due to other factors which are described below. AVN most commonly affects the hip joint, but it can affect other joints including the shoulder (humeral head) (see below). 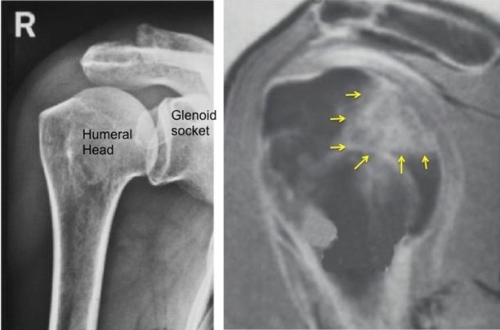 Then normal joint is shown on the left with a round humeral head (ball) on a concave glenoid (socket). With AVN the blood supply to the ball is damaged and a segment of the humeral head may collapse (arrows in images on the right).

When the blood supply to the ball (humeral head) is lost the bone dies. This by itself is not the main problem, but the body’s healing response results in a series of events which creates the problem. As the bone dies and then blood flow comes back to the bone, the cells in the bone (osteoclasts) remove the dead bone which is then replaced by new healthy bone (osteoblasts). There is an imbalance in this process where dead bone may be removed faster than new bone is created. This results potentially in collapse of the bone as it is weaker than normal. The cartilage which forms the joint may then break down as it looses its support of the underlying bone. (See figure below) 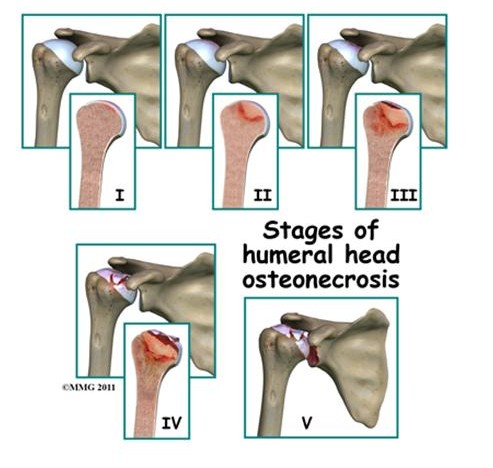 What Causes AVN of the Shoulder?

Medical research has identified a number of risk factors associated with AVN. Interestingly, not everyone who has a risk factor gets AVN and not everyone with AVN has an easily identifiable risk factor, meaning the cause is unknown or idiopathic.8 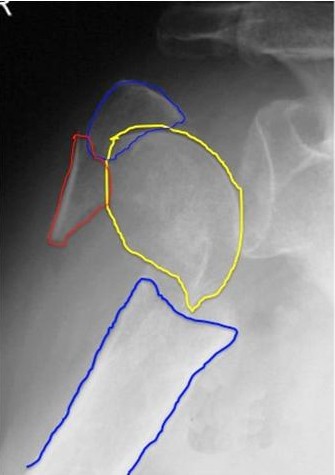 The fracture shown above has resulted in the ball (humeral head- yellow outline) being separated from the other parts of the proximal humerus (Tuberosity shown in red and blue and humeral shaft shown in blue outline).

Another common cause of AVN is the effect of steroids given for other conditions. The steroids are believed to damage the health of the cells which make bone in the humeral head and when they die the sequence of AVN occurs. Other causes of AVN can be radiation or chemotherapy treatment in the case of cancer. Other rare causes include sickle cell disease, Gaucher’s disease, Caisson’s disease (also known as diver’s disease or the bends: This is due to sudden change in water pressure in deep sea diving where nitrogen bubbles form in the blood and damage the blood supply to the humeral head). 1,2,8

What are some of the signs of AVN?

AVN usually presents as pain and may also be associated with noise and crunching sensation (crepitation) in the shoulder with movement. Movement may be limited due to pain. About 50% of individuals who develop atraumatic (without a fracture) AVN in the shoulder will also have involvement of other joints.3,4

How is AVN diagnosed?

In its early stages AVN may not be apparent on a plain x-ray but it can be seen on an MRI (described above). As it progresses with collapse of the humeral head and eventual arthritis it is clearly seen on an x-ray (see figures below).5 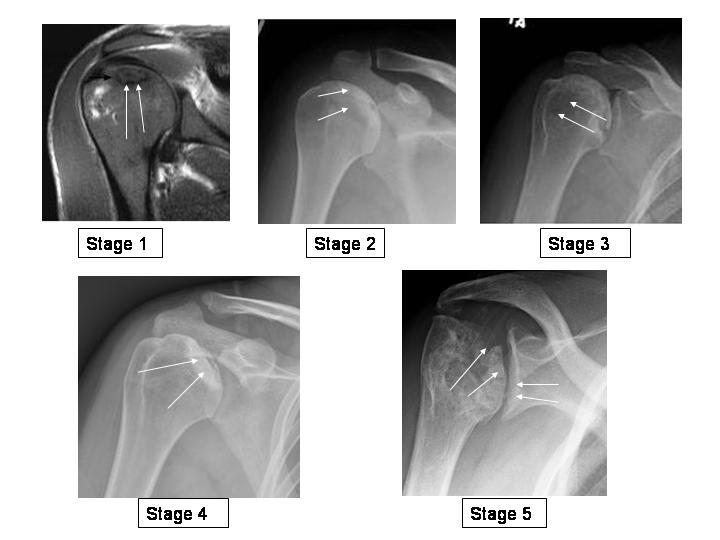 Stage 1 is a shoulder with a normal X-ray but signal changes on MRI showing subchondral edema. Stage 2 is a shoulder with more whitened bone called sclerosis, near the joint surface (subchondral). Stage 3 demonstrates a crescent sign or collapse or fracture of the subchondral bone. Stage 4 demonstrates flattening of the humeral head from advanced collapse. Stage 5 or end-stage AVN demonstrates advanced collapse of the humerus with degenerative changes of the glenoid (arthritis).

Does AVN get worse with time and what can be done about it?

A study that looked at 200 shoulders with AVN found that about 40% of shoulders with early AVN progressed in 3 years to advanced AVN. Patients that presented with later-stage AVN, 55-80% of patients (depending on how late the stage) progressed to advanced AVN6. Drilling of the humeral head, called core decompression, is a treatment which may be helpful in the early stages of AVN before the humeral head collapses. It is believed that pressure in the bone goes up when the blood supply is lost and that pain can be relieved by decompressing the bone by drilling into it. This is called core decompression. This may also stimulate better blood supply and faster healing in the humeral head.2 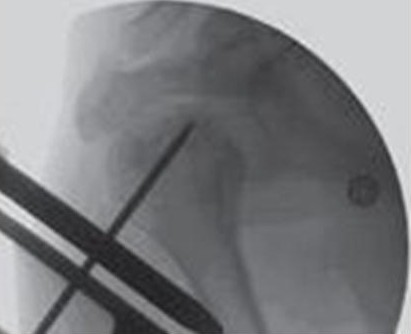 The above picture is an intraoperative X-ray of a percutaneous drilling of AVN of the humeral head.

Arthroscopy may also be helpful in some cases if the cartilage is damaged and loose pieces in the joint are causing pain. These can be removed with an arthroscopic technique as depicted below. 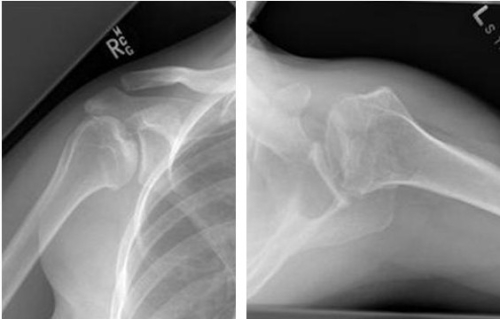 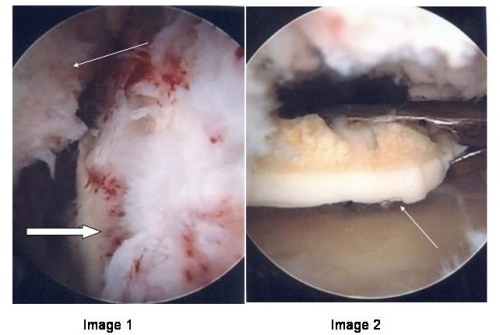 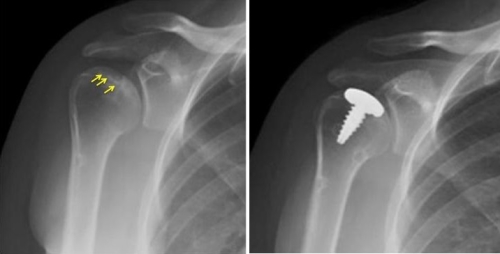 This 42 year old woman developed AVN after a fracture (figure on the left) and underwent a replacement of the humeral head (hemiarthroplasty) as shown in the figure in the middle. Eight years after her surgery she continues to work as a waitress, pictured on the right.